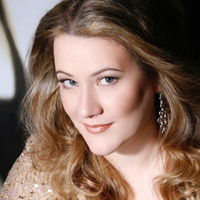 UAB Alumna, American Soprano Natalie Bergeron recently achieved an enormous success in her role debut as Elsa in Richard Wagner’s Lohengrin at the Theatro Municipal Sao Paulo. Previously she was seen as Maddalena opposite Marcello Giordani as Andrea Chenier, and Alberto Gazale as Gerard with the Orchestra La Verdi Milano under the baton of maestro Jader Bignamini, who subsequently brought her back to sing with the Orchestra La Verdi in an extraordinary concert of Italian opera arias and duets along side  tenor Yusif Eyvazov.

As a young artist, Natalie created the role of Blanche Germont in the Premiere of Dodici Personaggi in Cerca di Voce by the renowned Maestro; Bruno Rigacci in Chiari, Italy. Also as a young artist she performed Ines while covering Leonora in Verdi’s Il Trovatore with Opera Memphis, as well as a variety of roles including numerous productions as Donna Elvira in Mozart’s Don Giovanni, Rosalinda in Strauss’ Die Fledermaus, Lady Billows in Britten’s Albert Herring, Countess Almaviva in Mozart’s The Marriage of Figaro, Sylvianne in Lehar’s The Merry Widow, Musetta in Puccini’s La Bohème, and with Opera Birmingham the role of Giovanna in Verdi’s Rigoletto.