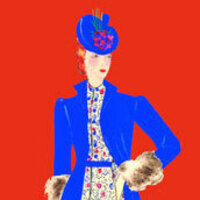 Stitching History From the Holocaust

Hedy Strnad, a dressmaker in Prague in the 1930s, was not able to escape Nazi-occupied Czechoslovakia. However, some of her fashion designs did. Eight of her sketches, along with the garments they inspired, are the focus of “Stitching History From the Holocaust,” an original exhibition created by and on loan from Jewish Museum Milwaukee that will be shown at the Abroms-Engel Institute for the Visual Arts in early spring 2019.

In March 1939, Hedy’s husband, Paul, wrote to his cousin in Milwaukee asking for help in acquiring visas for himself and his wife to emigrate to the United States. He included eight samples of Hedy’s dress designs to make the case that she would be employable in the American apparel industry. Despite attempts to emigrate to the U.S. to be united with family, the Strnad family were unable to escape from Nazi power and perished during the Holocaust.

For decades, the letters and Hedy’s sketches were stored away in a box in the cousin’s attic where they were discovered in 1997. They were donated to Jewish Museum Milwaukee, which teamed with the costume shop at Milwaukee Repertory Theater to turn the sketches into garments. “Stitching History from the Holocaust” is a detailed personal and historical exhibit built around the Strnads’ story, their life in Prague in the 1930s, and Hedy’s garments, which will be displayed on mannequins.