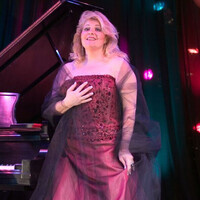 Known for her innovative style and approach to bringing classical music to broader audiences, Miss Hopkins won critical acclaim from the New York Times and USA Today for the limited edition ARIA. A first-of-its-kind music and fine wine project, ARIA is the marriage of a world class wine personally blended by Miss Hopkins with Tulip Hill Winery and her recording of well known classical Italian love songs at historic Capitol Records in Hollywood. The boxed set was an immediate mainstream hit.

Miss Hopkins made her debut at the Metropolitan Opera during the 1991 – 1992 seasons. Since then, opera lovers have appreciated her diverse repertoire on the world’s greatest stage.

Away from touring and performing, Miss Hopkins enjoys her position as a member of the voice faculty at the University of South Carolina in Columbia.