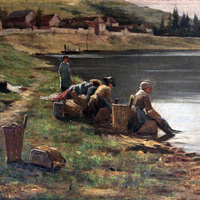 Focus IV Eclipse of the Hudson River School: Selections from the Koleszar Collection

A grand art movement focused on depicting the fledgling American landscape and rooted in the Romanticist style of Europe, the Hudson River School rose to prominence in the mid-19th century. Almost as quickly as it began, the Hudson River School saw a decline during the latter half of the 19th century. This exhibition explores the multifactorial rise and fall of one of the first uniquely American art movements.