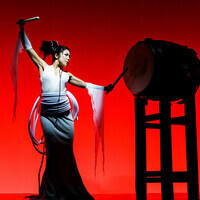 TAO’s stage is created through phenomenal performances and expressions consisting of incomparable “Wadaiko-drums” and the beautiful mesmerizing melody of Japanese flutes and harps. It is the “Japanese entertainment” for a new generation that completely surpasses expectations.

In 2017, their major recording debut with Universal Music was a compilation of their work over the past 25 years. It ranked as one of the top three in the iTunes World Album Ranking in five different countries. In 2018, they performed in the opening ceremony of “Japonism 2018” in Paris, France. They also co-starred with the Bolshoi Ballet as the opening act of “Japan Year in Russia,” held at The Bolshoi Theatre in Moscow, Russia, in front of the head of each country. Additionally, they appeared on the most renowned Japanese music program, “The 69th NHK Kohaku Utagassen,” in 2018.