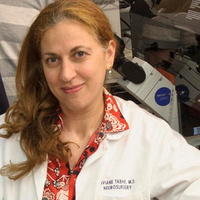 Viviane Tabar, MD is the Chair of the Department of Neurosurgery and the Theresa C Feng Professor in Neurosurgical Oncology  at Memorial Sloan Kettering Cancer Center in New York. She is a neurosurgeon with expertise in brain tumors, and a scientist with a focus on stem cell biology.

Dr Tabar’s research is focused on harnessing the regenerative potential of human stem cells towards repairing the brain. Her lab work has focused on the development of human pluripotent stem cell-derived dopamine neurons for Parkinson’s disease. She collaborates with a team of scientists and clinicians to bring this therapy to clinical trial. The lab is also working on developing cell therapies for chemotherapy and radiation therapy-induced brain injury. Dr Tabar’s lab has also developed the first human embryonic stem cell-based model of brain tumors leading to the discovery of a novel target pathway and a potential new agent for the treatment of gliomas. Dr Tabar was recently elected to the National Academy of Medicine. She has received several awards from the New York Academy of Medicine and the American Association of Neurological Surgeons, and was elected to the membership of the American Society for Clinical Investigation and the Society of Neurological Surgeons.

Lunch will be served to the first 50 people.