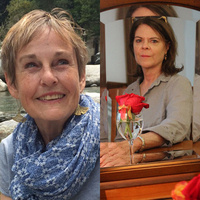 Ann Fisher-Wirth is the author of six poetry collections, including The Bones of Winter Birds, Mississippi (with Maude Schuyler Clay), and Dream Cabinet. She is co-editor of the Ecopoetry Anthology. 2017 Poet in Residence at Randolph College, she is a senior fellow of the Black Earth Institute. She has had senior Fulbrights to Switzerland and Sweden, and residencies at Djerassi, Hedgebrook, and elsewhere. Professor of English at the University of Mississippi, she also directs the university’s Interdisciplinary Minor in Environmental Studies and she teaches yoga in Oxford, MS.

Maude Schuyler Clay was born and raised in the Mississippi Delta, where she continues to live and work. She returned to live in the Delta in the late 1980s and was photography editor of Oxford American from 1999 to 2004. Her work is held in the collection of the Museum of Modern Art, the National Museum for Women, and the Houston Museum of Fine Arts, among others. Her books include Delta Land, Delta Dogs, and Mississippi History.

BACHE (the Birmingham Area Consortium for Higher Education) is a partnership among the five, four-year colleges and universities in the greater Birmingham area.  BACHE consists of UAB, Miles, Samford, Montevallo, and Birmingham Southern College.