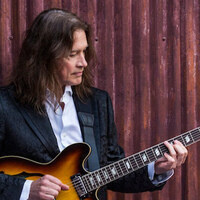 Five-time Grammy nominee Robben Ford achieved worldwide fame both for being a solo artist and for his collaborations with a diverse musical who’s who that includes Miles Davis, George Harrison, Steely Dan, Joni Mitchell, Dizzy Gillespie, Georgie Fame, Kiss and many more.

“Purple House,” his latest studio album, co-produced by Casey Wasner, features nine powerhouse tracks, and the album’s genesis, according to Ford, was simple and uncomplicated. “My concept for the record was to do something with a lot more emphasis on the production than I’ve had in the past,” Robben said. “I’m always pushing myself with each record. I haven’t made one record that sounded like the one before it, and this was going to be no different. ‘Purple House’ was a great opportunity to try something really different.”