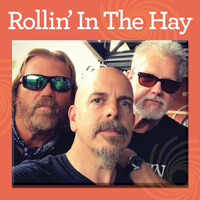 Rollin' In The Hay

Join us on the [virtual] dance floor for some foot-stompin’ music by Rollin’ In The Hay!

Rollin’ In The Hay is the epitome of high-octane groove grass with a touch of down-home foot-stompin’ or just simply Renegade Bluegrass. Long considered to be one of the forerunners of the “Newgrass” revolution in America, these savvy veterans have been thrilling fans coast to coast for years! Opening for everyone from Greg Allman, Moe, Charlie Daniels, The Doobie Brothers, Jerry Douglas, Alabama (this list could get LONG) to Widespread Panic, the unique sound of the Hay keeps fans coming back for more. Rollin’ In The Hay has six self-released CDs but also has done 15 nationally released instrumental tributes called the “Pickin’ On” series. With the approval of the band, there are tons of live “bootleg” shows on the internet. Based out of Birmingham, Alabama, the band uses www.rollininthehay.com as well as a very active facebook.com/rollininthehay to keep fans informed. Being listed in the Alabama Music Hall of Fame as “Music Achievers” is one of this band's proudest accomplishments.